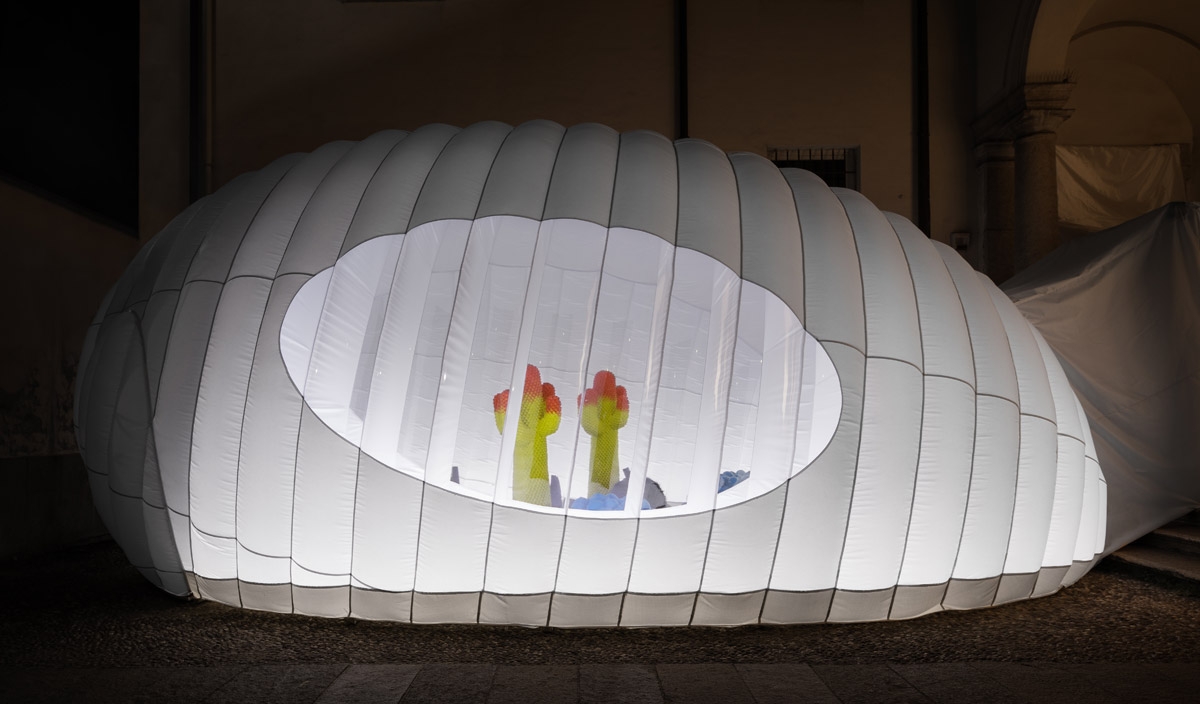 A strange interplanetary energy will invade the spaces of Mediateca Santa Teresa giving everyone the opportunity to visit a new world, an insanely creative dimension where form and function, appearance and substance are revolutionized.

"By searching the archives, we found that at the end of the 60s designers and artists who collaborated with Gufram had already managed to establish a relationship with another dimension," reveals Charley Vezza, Global Creative Orchestrator of the brand. "It was 1967 and the mathematician Tullio Regge had just created Detecma, the first furniture piece designed with an electronic calculator. Its toroidal shape could create a wormhole allowing the first captivating glimpses of a distant planet where extraordinary sculptures arising from the ground could be observed."

This secret has been jealously guarded for years, along with all drawings and depictions of Planet Gufram that were kept in a vault in the company. "We had already decided to collect the drawings in a video to be presented during the Salone del Mobile 2017", continues Charley Vezza, "then NASA revealed the discovery of the Trappist 1 planetary system and, through the study of its exact astral position, we discovered that Planet Gufram was part of it."

Soft cacti grew from the soil, ionic capitals eased down on rocky deserts, and meadows with giant stem filled the valleys: everything around Planet Gufram seemed amazing and insane.

This strange planet is based on the complex chemistry of plastic polymers. For this reason, the majority of its elements  are made of soft but resistant polyurethane, thanks to a particular mix of different atmospheric agents that form the Guflac. The latter is the special elemnt that forms a film over the polyurethane maintaining its softness that Gufram was able to study and patent on Earth.

Having discovered the exact position of the planet, the brand asked Snarkitecture,   the New York design studio known for its futuristic and avant-garde architecture, to create a true “stargate” disguised as a mirror, Broken Mirror. Installed inside Mediateca Santa Teresa, the portal has been activated allowing everyone to access this fantastic world.

However, since this was the first attempt at this experiment, there were a few unknown side effects. Planet Gufram started to invade the Mediateca! A waterfall of black plastic sand poured into the room where Broken Mirror was installed, forming hexagonal crystalline structures that evolved into totem-like sculptures with the strangest shapes.

Once this invasion started, the stargate was closed. Who knows what would have happened if this continuous exchange between Earth and Planet Gufram had continued? In the meantime, even the courtyard of the Mediateca Santa Teresa had already been overtaken by new lifeforms. The Biosphere was created to preserve them.

A giant cocoon preserves a garden made of several Cactus and the giant  Bloom flowers by Marcel Wanders, while a strange furry animal, named Ron Ron by the artist Marion Baruch, roams freely. 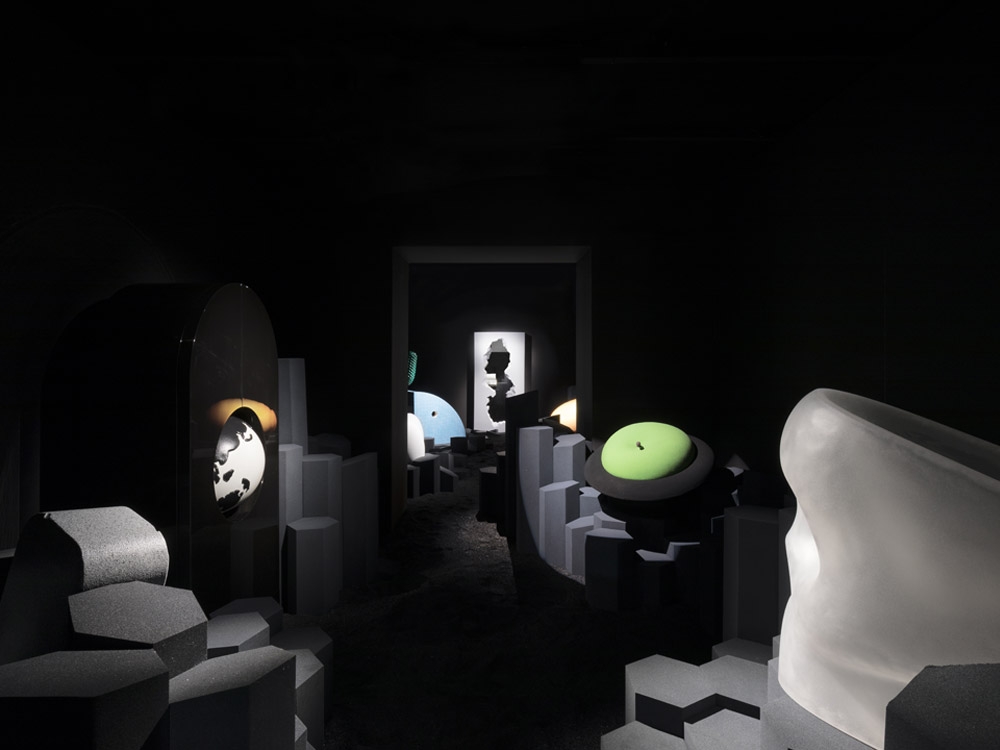 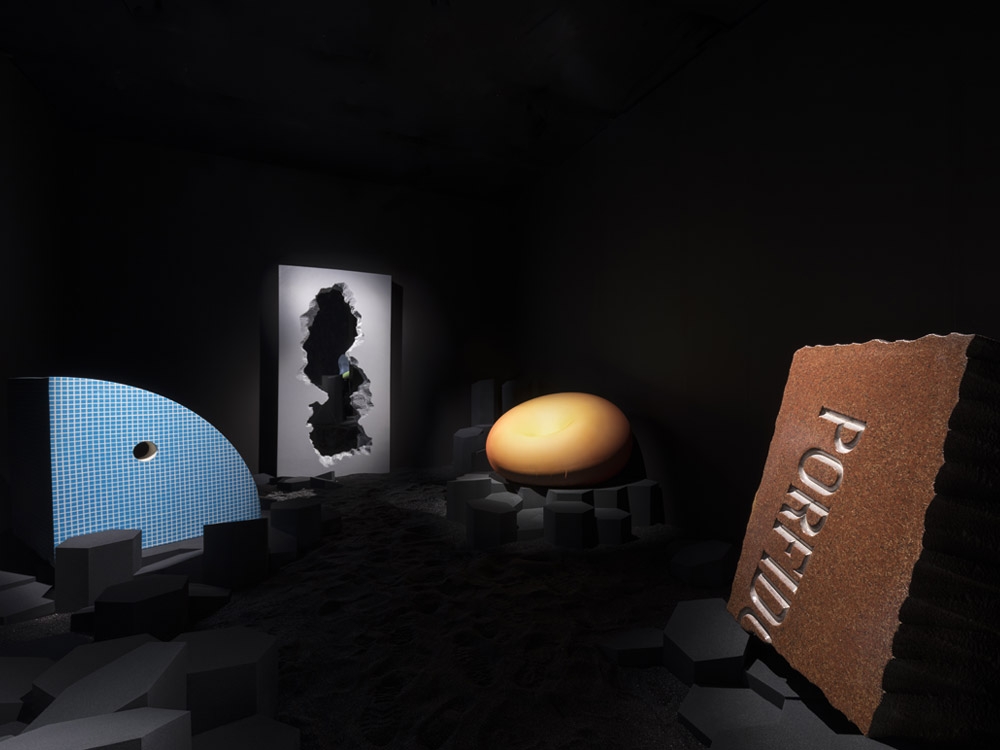 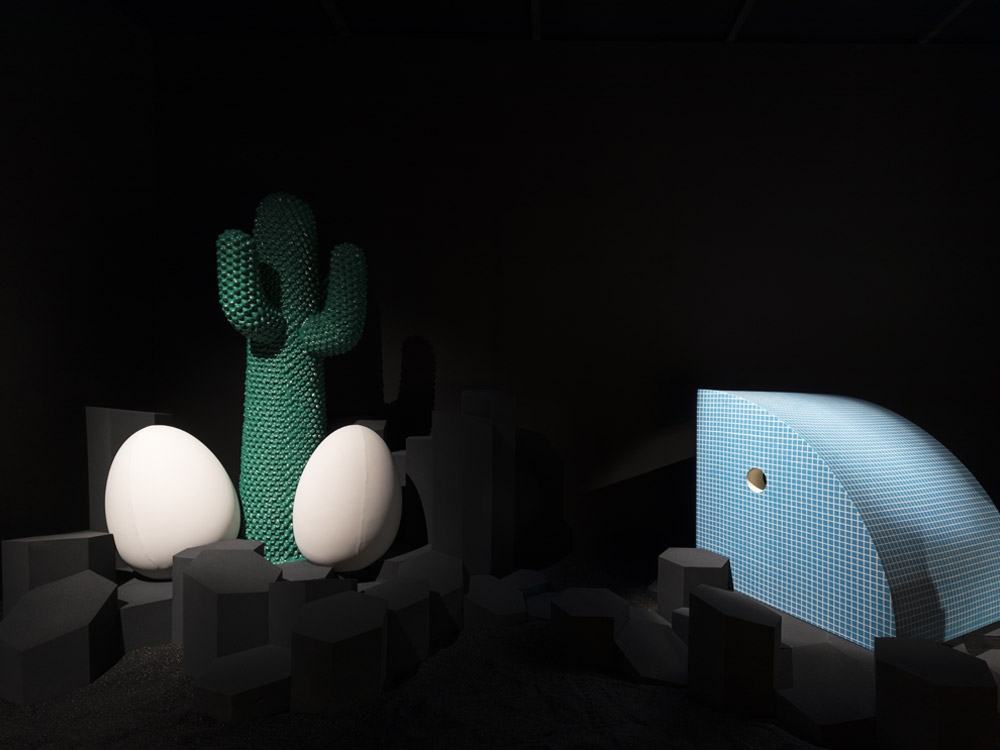 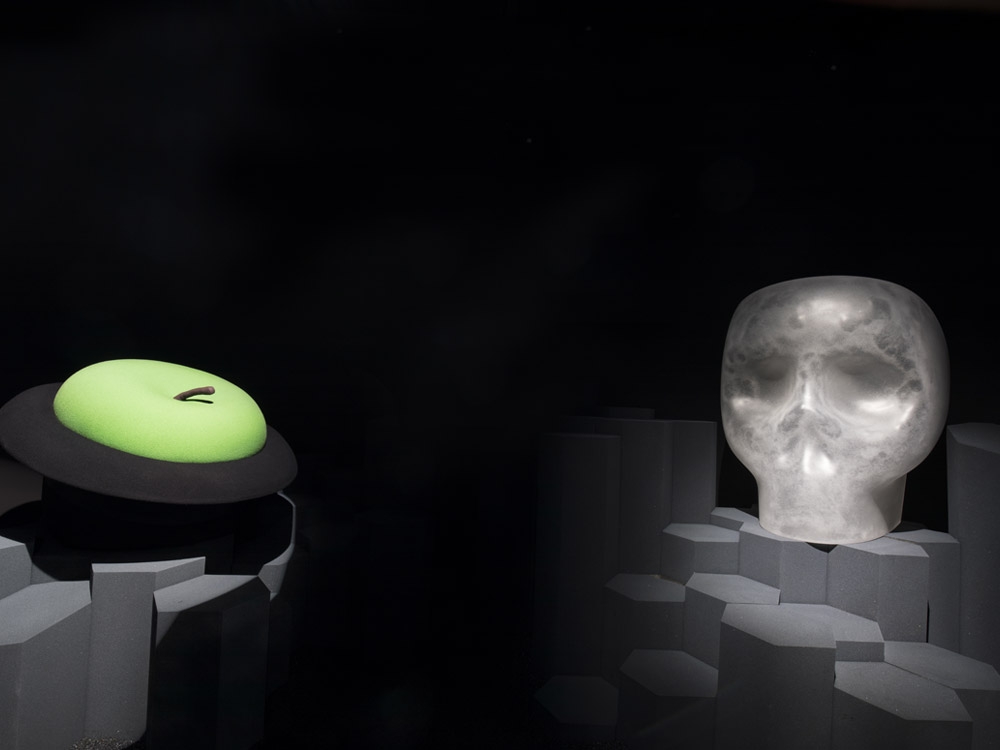 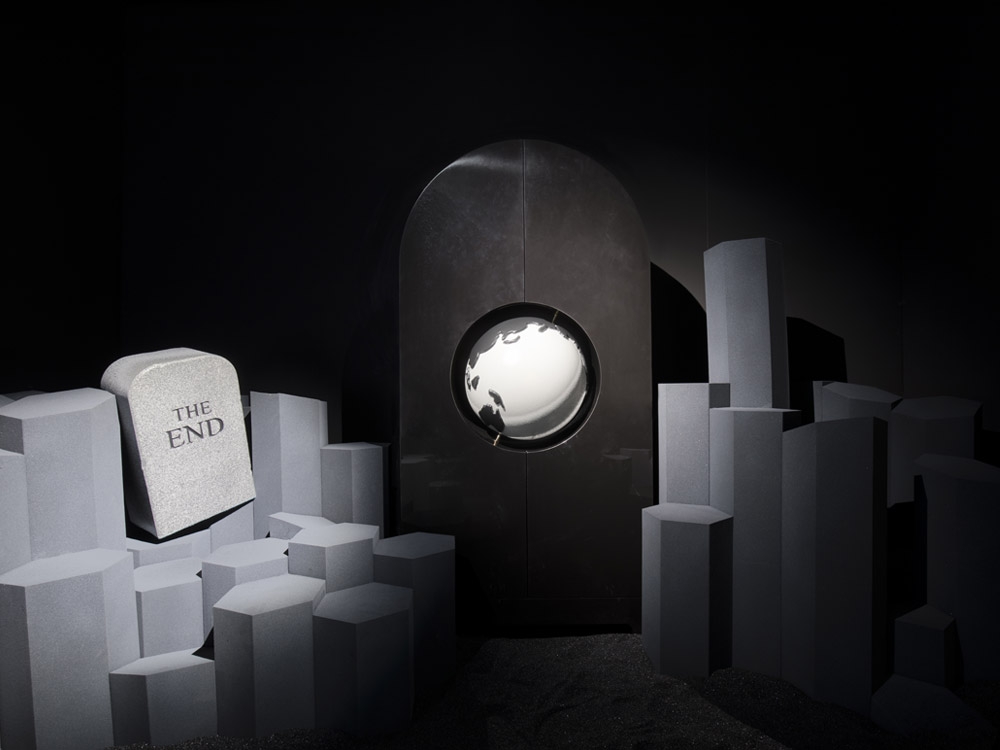 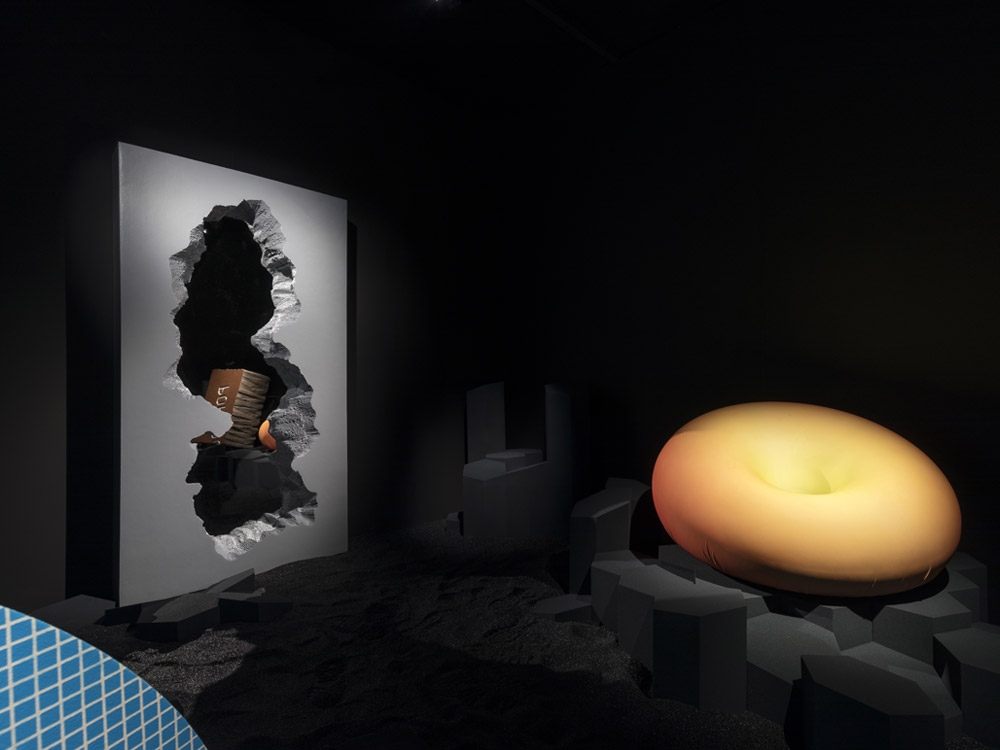 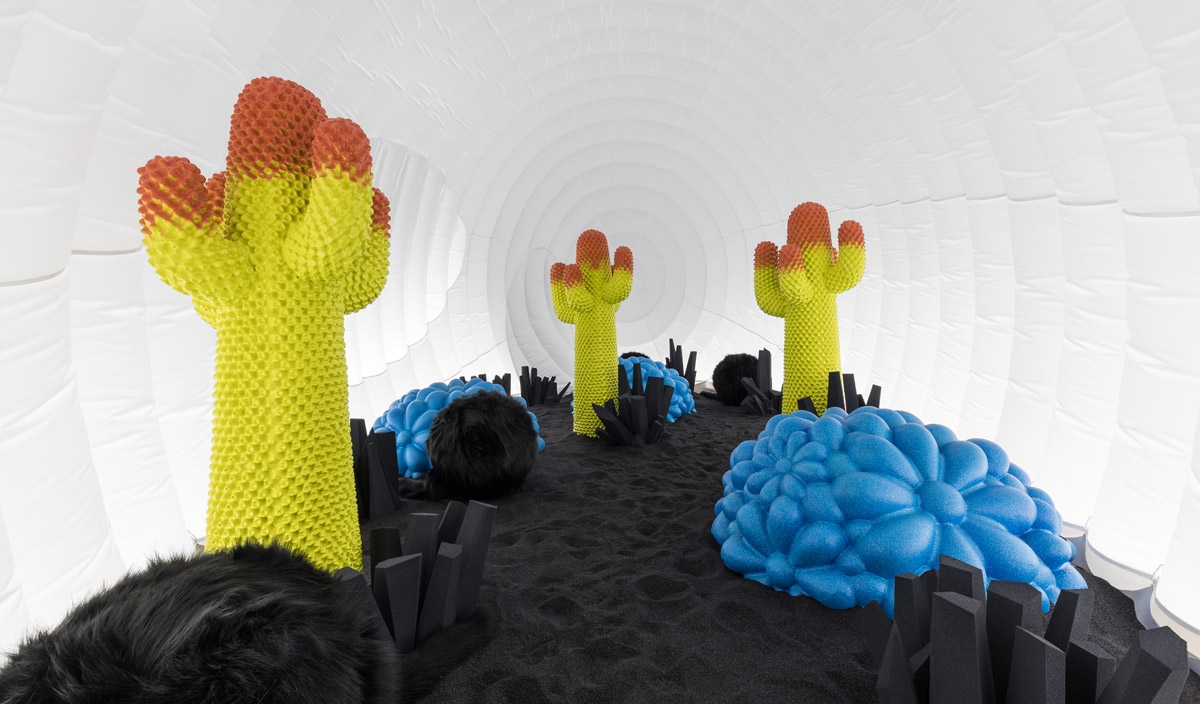 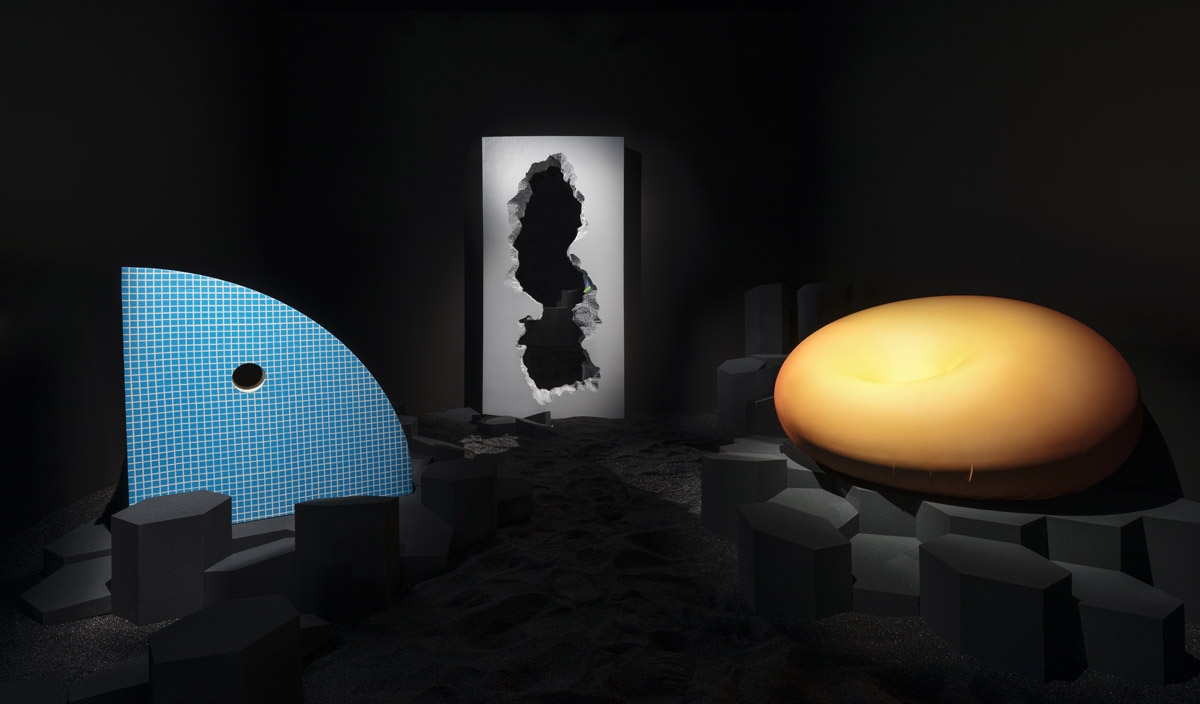