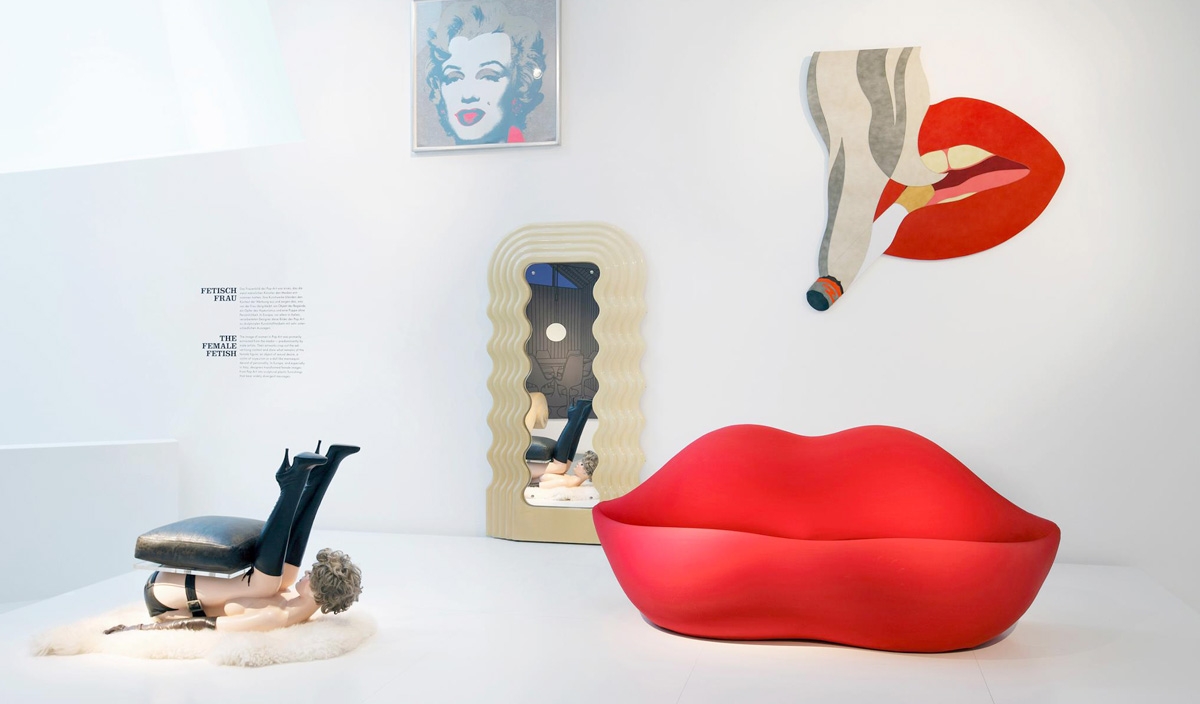 Pop Art is widely regarded as the most significant artistic movement since 1945.
Reflecting on the cult of celebrity, commodity fetishism and media reproduction that permeated everyday life in the postwar era, Pop Art continues to shape our society’s cultural self-understanding to this day. A central characteristic of Pop Art was the dialogue between design and art, which is now being explored in “Pop Art Design” at the Vitra Design Museum as the first-ever comprehensive exhibition on the topic. Works by such artists as Andy Warhol, Claes Oldenburg, Roy Lichtenstein or Judy Chicago are paired with design objects by Charles Eames, George Nelson, Achille Castiglioni and Ettore Sottsass. The exhibition is supplemented with a multitude of further exhibits, such as album covers, magazines, films and photos of contemporary interiors. Fifty years after the official declaration of Pop Art in a conference at New York’s Museum of Modern Art, the exhibition “Pop Art Design” thus paints a new picture of Pop Art – one that finally recognises the central role played by design.

With its pointed juxtaposition of exhibits from the fields of art and design, the exhibition not only presents a fascinating panorama of a past era but also offers new insights for both disciplines. It shows how design was an equal dialogue partner for Pop Art, in some cases even the lead impetus. At the same time, it demonstrates that many everyday objects and the Radical Design of the 1960s were serious facets of the Pop movement. Instead of merely celebrating the zeitgeist of an epoch, the exhibition seeks to take a more detailed look at the Pop phenomenon: at the migration of motifs between art and design, at the relationship between everyday object and image and, not least, at how everyday life first came under the still-dominant influence of pop culture. This perspective holds particular relevance today as it examines Pop Art’s relationship to our own daily lives and the consumer culture that remains so omnipresent. Even if many proponents of Pop Art remained deliberately ambiguous in their stance toward such issues, one of the movement’s historical achievements lies in continually bringing renewed awareness to these questions.

In developing the exhibition concept, the exhibition is able to draw on exhibits that have rarely been seen in this quality and density. Altogether it unites some 140 works, half of them artworks and half design objects, supplemented with numerous photographs, documents, films and texts. The highlights of the exhibition include an early screen designed by Warhol (1958), a “Target Painting” by Jasper Johns (1957), the sofa “Leonardo” which has hardly ever been exhibited since it was first produced, Roy Lichtenstein’s large-scale “Yellow Brushstroke” (1965), James Rosenquist’s “I Love You with My Ford” (1961), the monumental floor lamp “Moloch” by Gaetano Pesce (1970-71) and Allen Jones’s “Chair” (1969).

The exhibition’s current relevance is emphasised with an accompanying exhibition in the Vitra Design Museum Gallery dedicated to the Austrian artist Erwin Wurm. Wurm’s oeuvre exemplifies the many contemporary artists in the post-Pop Art era who explore the boundaries between art and design, commercial clichés and everyday culture. In addition, the exhibition’s supporting programme highlights the connections to current debates. The events include an opening discussion with the curator Daniel Birnbaum and the Pop Art artist Peter Stämpfli, a discussion between the artist Tobias Rehberger and the graphic designer Chris Rehberger as well as talks on the architecture of the playboy lifestyle, the connections between the cult products of the 1960s and Apple or the current renaissance of illustration art. Numerous workshops, film screenings and other events and activities round out the programme. 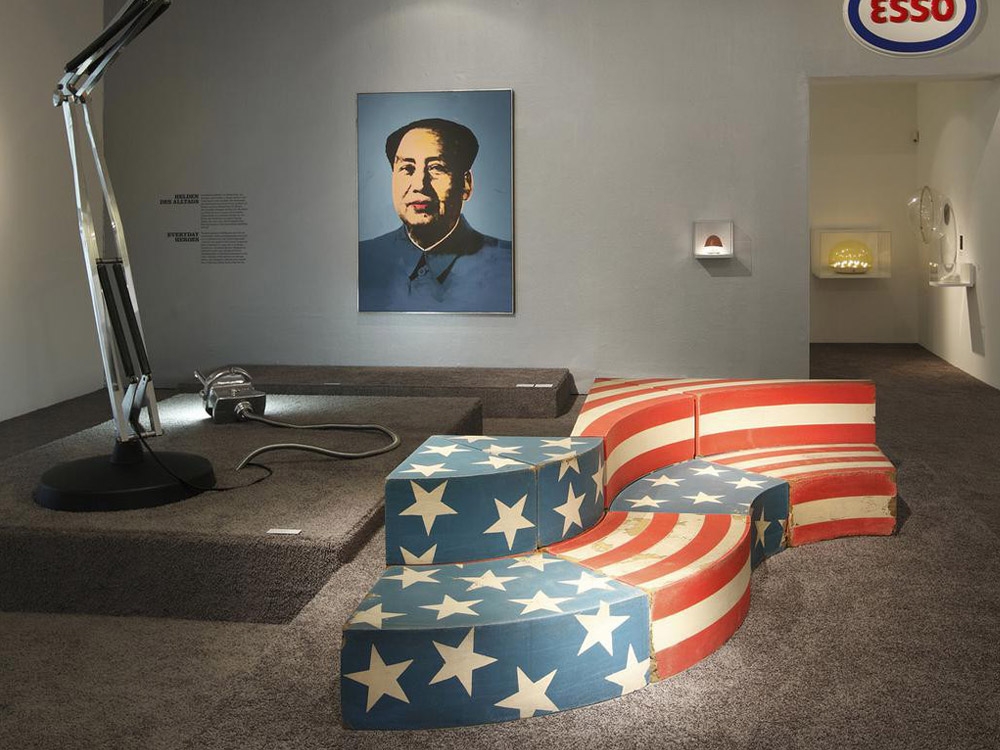 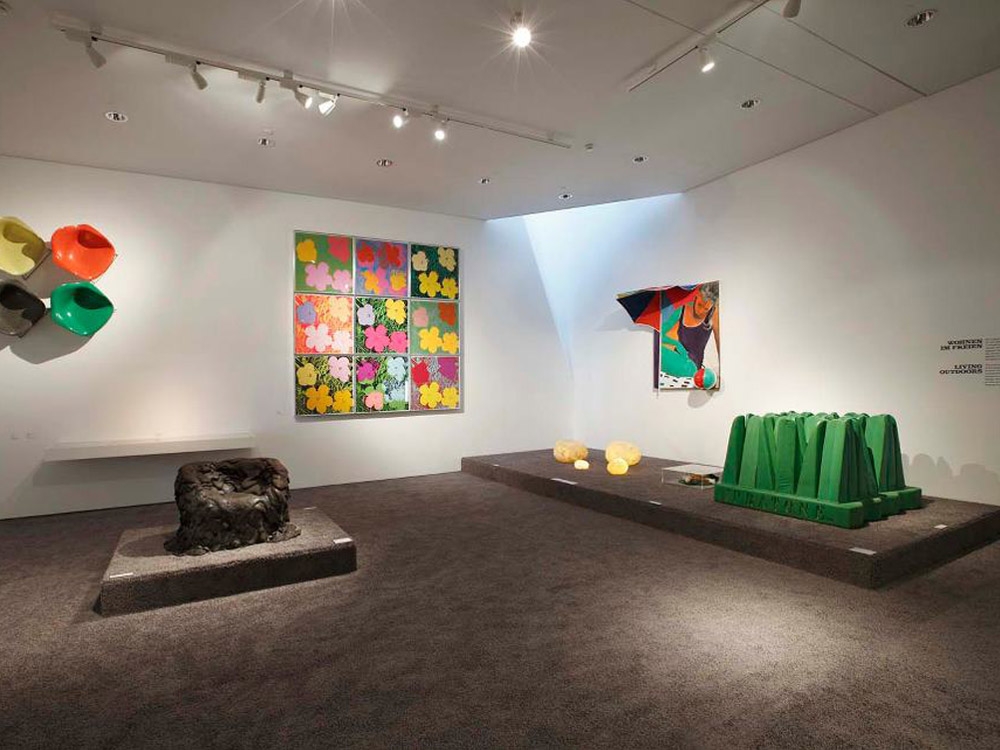